Does the iPad Mini Have Some Stiff Competition? 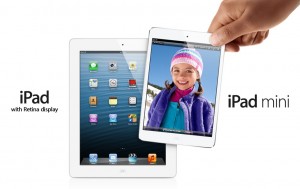 The iPad and iPad Mini have done very well for themselves. It seems that when people think of technology, and its future, we continue to think slimmer, smaller, and sleeker. We saw this trend first hand when the iPad Mini first released. It has now become one of the staples to the iPad series. While Apple is still leading the tablet market, there have been many strong competitors show up  over the years and make their mark on the tablet battlefield. Take for example, the multitude of Android tablets and Microsoft tablet/laptop combos like the Surface Pros. Even Kindle came out with a competitor to the iPad Air. Now though, there may in fact be a sleek competitor against the iPad Mini.

The Lenovo ThinkPad 8 may very well be the tablet that can hold its own against Apple’s iPad Mini. During it’s unveiling at the CES event in Las Vegas, many got to view and hold this tiny new powerhouse. It is currently running with Windows 8.1 OS on the Atom mobile CPU. This CPU is the newest that Intel has to offer. It weighs in at less than one pound and includes a SIM card slot. The slot is said to be used for LTE support in other markets, and is currently only available in a Wi-Fi Only mode here in the States. That being said, representatives from Lenovo did say that a mobile broadband option should be coming here to America as well. The ThinkPad 8 also includes a front and rear facing camera, like its competitor, the iPad Mini. The rear camera for the Thinkpad however is an 8MP where as the iPad Mini’s rear-facing camera resolution is set at only 5MP. The front facing camera on the new ThinkPad is comes with a 2MP resolution. The screen on the ThinkPad also surpasses the iPad Mini in size, but not in resolution. With the ThinkPad having a 1920 x 1200 resolution display, it doesn’t quite match up to the iPad Mini’s retina display at 2,048 x 1,536 resolution.

During the showcase, the new tablet was also showing off a new case to accompany the device. Much like the Kindle Fire HDX 8.9’s special Origami case, the new case for the ThinkPad adds some similar functionality to the device. Where as you would slide the case down for the Kindle Fire HDX camera to activate, the new ThinkPad case actually has a corner tab that flips down to reveal and enable the camera on the tablet. Its reminiscent of the SmartCases for the Apple iPads and how the put your device to sleep when covered but activate when uncovered.

The lowest end model for the new ThinkPad 8 sits at $399 with 8GB of RAM and 32GB of storage space. Obviously the more money you spend, the more storage will be getting as it will also be available in 64GB and 128GB models. It is definitely shaping up to hold its own in the tablet wars and seems to be adapting with the markets competitors in terms of casing, processors, and accessories. Now all that is left to see is how its sales numbers will stack up against the iPad Mini’s and how well the new Windows 8.1 OS will work on the tablet.

For Your Next Business iPad Rental Check Out Rent Our Tablets! Your One Source For Tablet Rentals 888-736-8301