While it is normally easy to find what processor, screen size, and amount of RAM a device comes with, it is typically harder to find out whether or not your device can survive being dropped 4 feet without finding out for yourself (Pro tip: don’t test to see if your tablet can survive a 4 foot drop, there’s a high probability that it will not). You may not always need a tablet rental which is ultra-durable but it’s always good to know whether or not your tablet can survive basic every-day interactions, such as being slid across a desk or falling 4 feet.

Since our company doesn’t revolve around technology durability, we’ll be referencing information provided in an experiment by SquareTrade, a technology protection and repair company, which compared the durability of multiple tablets. The three durability tests which can easily happen in real-life scenarios are the slide test, the 4 ft drop test, and the water submersion test. These experiments happened in late 2014, but some tablet models have remained mostly the same externally over the passage of time. The three tablets we will be comparing are the iPad Air 2, the Samsung Galaxy Tab S 8.4, and the Microsoft Surface Pro 3.

Generally speaking, the larger the tablet the less likely it is to survive a four foot drop onto a cement floor. The Samsung Galaxy Tab S 8.4 was the smallest device, and it was also the only one of our three devices which sustained no damage from the drop test. The iPad Air and the Surface Pro 3 both had their screens shattered upon impact.

If you are a fan of sliding your tablet screen-down on a table, you should probably stop, or consider getting a Surface Pro rental. Sadly, SquareTrade did not provide much detail on how the scoring for this specific test was done, so don’t try sliding your Surface Pro around just to see how it holds up. The experiments did however say that the Surface Pro handled this test the best, followed by the Galaxy Tab, and then the iPad Air.

If your tablet is ever underwater, it’s probably because you accidentally dropped it first. However for this test, tablets were purposely submerged in 3 inches of water for 10 seconds. The Samsung Galaxy Tab came out of this test unscathed. The Apple Air 2 was also operable after submersion, but the Surface Pro had a system failure after the test.

The Samsung Galaxy Tab held out the best overall in terms of durability, with the iPad Air 2 providing a middle-ground and the Surface Pro 3 coming in last. Durability isn’t everything of course, for your tablet rentals you may need more intense internal hardware like what is provided in Surface Pro models. If you only need durability however, get a rugged tablet rental. Rugged tablets are specifically made for the harshest work environments, and are much more durable than the standard consumer-grade tablet.

Want to share this story on social media? Use this hashtag! #TabletRentals

There’s some more exciting news and speculation for the mobile device crowd, the news is that Samsung’s MWC 2017 Press Conference is happening this month on February 26. The speculation is a bit more interesting: Samsung may be unveiling a new tablet instead of a phone during the conference based on the conference’s invitation picture. This really isn’t that much information to speculate off of alone, but the FCC has allegedly already certified the Samsung Galaxy Tab S3.

Some believe that this image is a picture of the bottom of a tablet, but it very well could just be a bit of detail added to the top or bottom of a phone, or it could actually be the home button for the device. Unsurprisingly, this speculative tablet already has some leaked speculative specs. Here’s a list of some of the rumored specs backing the tablet:

You may have noticed the bold “or” between the Snapdragon 820 and the Exynos 7420, this is because we’re not sure what kind of processor this new tablet will have yet. The Samsung Galaxy Tab S2 is a reliable device, and is a popular choice for event tablet rentals, but the Samsung Galaxy Tab line is in more need of something new and more powerful than their flagship phone series.

The strangest thing about this is that the MWC 2017 Conference is a phone show first and foremost. However, we all know that Samsung is not bringing their flagship series, the Galaxy S series, an update at the conference this year. It’ll still be a bit surprising to see if these rumors will hold true.

Want to share this story on social media? Use these hashtags! #MWC2017 #SamsungGalaxyTabS3 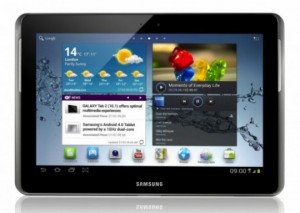