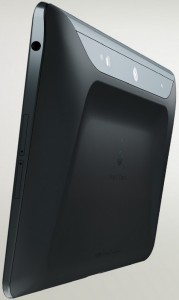 3D Gensture Sensor’s For Your Tablet: Practical Or Not?

Recently we have seen a big rise in motion control and 3D gesturing and sensors. Take the Xbox Kinect and the Playstation Move for example. Both are using 3D motion control technology to accurately capture and process your movements to make games more interactive. A fun an and entertaining concept no doubt. But, what about this? What if you were able to use the same type of technology on your smartphone or your tablet? Would it be worth all the commotion it would cause? Would it be practical? Or, would it be just another cheap gimmick to try and reel customers? After, touch screens were designed for, well… touch.

The company, Leap Motion, has already seen its motion control product utilized on desktop computers an laptops alike. For those unfamiliar with the device, the Leap Motion Controller, is a sensor that plugs directly into your computer and allows you to take control of your PC’s or laptop’s functions with just simple hand gestures. Well, now they have plans to expand their market.

Leap Motion is doing it’s best to see mobile devices, such as your tablet, using its 3D motion control interface. The CEO of the company expects to see this be implemented in new mobile devices by the end of 2014.

Since the Leap Motion Controller is a separate device, it would need to be somehow integrated into the hardware of a phone or tablet itself. Recently, the challenges that were faced with integrated the technology into smaller hardware has been overcome and has since seen its way onto an actual product. The HP Envy 17 laptop has actually put the motion control sensor created by Leap into the laptop and has put it out for consumer use. Now the object is to see the same type of technology put into mobile devices for commercial and consumer use.

When asked about the possible new functions for the technology, Leap had mentioned that they were working with manufacturers to make the transition as seamless as possible. They are doing their best to make specific gestures fitted for mobile devices. With the ability to use your tablet as a TV remote with gesture-based control functions, Leap has definitely opened up a whole new market with their product. The chance to actually have different devices’ functionalities coincide with one another based on the embedded technology is quite remarkable, but then comes the question on whether or not it could be viewed as practical.

When looking at it from a marketing standpoint, having this technology embedded into tablets and other mobile devices already is reason to believe that it is important enough to see proper use and practicality when utilized. It still brings back the thought of, touchscreens being for touch. The “pinch” and “spread” motions are already there for us on the touchscreens. This technology will just allow us the capability to do it in free space above the sensor. The company to trying to see this technology on the mass market anywhere from July to December of 2014, so be on the look out from summer to winter of next year.