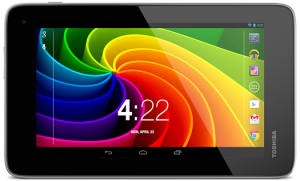 Our whole lives, we have been taught that you get what you pay for. Generally when we see a high tech gadget that is priced well below its competitors, we automatically assume that it is no good, and we should just save up for the upgrade instead of giving in to the good price and ending up disappointed. This new budget priced tablet from Toshiba, though, may just change the way we think about budget priced devices.

The 7 inch Toshiba Excite Go runs Android 4.4 KitKat and is priced at a mere $99.

One of the reasons that we may associate low price with low quality is that generally, top notch companies like Toshiba wouldn’t be putting out cheaper products. Most budget priced electronics are made by knock off brands that no one has ever heard of, or well known companies that are well known for being terrible. They generally leave much to be desired and feature bottom of the barrel components and specs. Would a bigger name like Toshiba let themselves put out such a cheesy product, even if it was cheap in price?

So far, it is looking like the answer to that last question is “no, they wouldn’t”. The Toshiba Excite Go is actually looking like it is going to be a pretty solid tablet. It has a 7 inch display, a 1024 x 600 pixel resolution, and it is powered by a quad-core Intel Atom processor. The internal storage is pretty impressive for a budget priced tablet as well. It has 16GB of internal storage, and it also has a MicroSD card slot so that you can upgrade your memory by up to 128GB extra. Looking at all the specs, it doesn’t seem like this would be a very low priced tablet at all. It seems like it could actually be a pretty competitive device. It also offers up to 8 hours of battery life with normal use and up to 6 hours of watching videos.

It looks like Toshiba may be able to change the way we think about budget priced electronics with the launch of this new tablet. For just $99 maybe they will actually be able to deliver the performance and features that we all want for a price that we can all afford. I guess we will all be able to find out in June with the Toshiba Excite Go officially launches.

Are You Looking For An Affordable Tablet Rental? Contact www.RentOurTablets.com At 888-736-8301 Today!