Samsung’s Tab Pro 8.4 Might Not Be As “Professional” As You Would Want It To Be 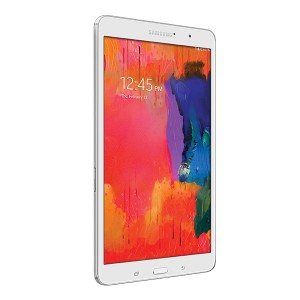 In all my years, I can’t deny that I’ve been mislead by different products and their hype. It’s like hearing how funny or scary that new movie at the theaters is. You get excited, and when you see it, it’s not nearly what you thought it would be because of all of the hype surrounding it. The same thing happens with new tech that comes out. You read the previews. You see how the company releasing the device paints the prettiest picture of their new product. They put it in the best light. You get so excited for it. You may justify some type of need that would deem it necessary to get the new device, and then it happens. You get your new device and you’re less than impressed. Unfortunately this is the way of the new Tab Pro 8.4 from Samsung.It’s not like the companies that create these different technologies intend on their products failing or not living up to the standards of their customers. The sad truth is though, is that as soon as you buy a new device, it’s obsolete. That’s just how quickly technology develops these days. There is always something better coming out or already out that you may be unaware of.The new Tab Pro 8.4 is as big as the number in its name; 8.4 inches. It’s part of the mid-size tablet family, and is lacking some of the design specs that came with the other tablets in the Samsung family, like the 8 inch Galaxy Note 3. One such example is the lack of the S pen stylus that comes with the Galaxy Note 3. Normally that might be a small inconvenience, but the fact that both of these tablets are priced at the same price makes it slightly more annoying out of sheer principle. That annoyance noted though, the screen resolution is better on the Tab Pro 8.4. The Tab Pro comes with a 1,600 x 2,560 pixel screen, with 359 pixels per inch. Thats much better than the 800 x 1,280 pixel resolution screen and 189 pixels per inch on the Note 3.

A tablet is much more than just screen size and resolution however. The software and apps of a tablet mean a lot as well. The software of the new Tab Pro 8.4 isn’t necessarily BAD, but some of the features that it COULD have come with didn’t show up, and I’m not exactly sure why. The Tab Pro allows for multi-window and multi-tasking features. This means that you can have certain apps going side by side the same time and go in between them. Only issue being that the side by side apps can’t work in conjunction with each other. If you have your email open and some type of “Word” document open next to it, and try to drag it over to attach it into the email, it won’t attach that way. That can be annoying along with the fact that it doesn’t come with any type of “Office” programs. The ones that come recommended feel like simplified versions once you download them.

Some other downfalls of the device include the camera and the advertised battery life. The camera itself is better than the Note 3 on the back. 8MP on the Tab Pro pitted against the 5MP of the Note 3. Even with the higher megapixels, the camera on the Tab Pro still takes about 4 seconds or so for the flash and image to fully process into an image, which seems a bit longer than it should be for a tablet. The battery SAYS 12 hours of video playback, but don’t expect to get that. While this 4800 mAh battery is better than the 3200 mAh batter of the Note 3, it’s still subject to the availability of Wi-Fi, 3G, and 4G LTE. This means that it might have to try harder for certain program functions. That being said, you should still be able to get roughly 6 to 8 hours of constant use out of it before needing a recharge, and that’s not that bad I suppose.

All in all, the new Tab Pro isn’t BAD by any means, but its just not as “Pro” as the name makes it out to be. Then again, some people’s standards may be higher than others. If interested in this particular model, I highly suggest renting it before you buy so you can be sure that this tablet is the one you want.

For Large Quantity Tablet Rentals Go To www.RentOurTablets.com Or Call 888-736-8301